Last time, we introduced the cloud funding service “INDIEGOGO”. [Simple explanation] What is “INDIEGOGO”, the heavyweight of the crowdfunding site?

This time, we will review the feeling of use of “PaMu Scroll” that was actually invested at that time. Some people may be wondering what the reputation of the goods and services they have obtained through crowdfunding is so please take a look.

This time, I supported an earphone called “PaMu Scroll”. The company has previously planned a predecessor of PaMu Scroll called PaMu X13 at Indiegogo and has successfully raised funds. In crowdfunding, it is recommended to invest in companies that have been successful in the past.

A major feature of PaMu Scroll is its high cost performance. Even though it can be acquired with a capital of 39 dollars, it has the same performance as an earphone that costs that amount.

The points to be noted are as follows.

… and so on. Next we will tell you about the actual feeling.

PaMu Scroll is a surprisingly low price as a wireless in ear headphones with an investment of $39 in Indiegogo. However, because of its low price, some people may feel anxious about “the performance is low”. I will evaluate the impressions I have used for a week since I arrived from various angles.

Although it was said that it was improved so that the bass sound might come out well, the bass sound was actually enough. However, there was an opinion from other users that “I want more”, so it may be a little unsatisfactory for those who are particular about bass. In addition, there was a clear sense of immersion because the overall sound was felt and the fit with the ears was good. It may be close to the feeling that live is happening at your ear.

PaMu Scroll was able to be easily connected though complete separation type wireless earphone sometimes took time to connect. I tried to connect with a smartphone, but since it was completed by simply turning on Bluetooth and taking out the earphone, there was no more convenience.

One of the most concerned elements of fully separated wireless earphones is the lack of sound, but I didn’t feel that kind of feeling. I am on a packed train at the timing of commuting to school for five days a week, but this is a great advantage because I have only heard a loss of sound once.

I also watched the video and tried to see if there was a delay in the sound, but there was almost no problem here either. In general, it can be said that there is considerable connection strength. However, please note that the game using music is a little uncomfortable.

The earphone itself is about the size of the first joint of the index finger, so it doesn’t get in the way. In addition, the case is almost the same size as a business card holder, and even if the case is included, it is quite light and easy to carry around.

Since the earphone has a microphone, there is no need to keep holding the smartphone. It was very comfortable to talk for about an hour. I think it is convenient for those who make long calls.

PaMu Scroll allows you to “play”, “stop”, and “send songs” depending on the number of taps. The tap response is unstable and I feel a problem with operability. Once I got the knack, I might be able to use it, but even if I used it for a week, it didn’t work.

I actually ran it, but it didn’t come off at all, and it worked fine in the rain.

What do you think. “PaMu Scroll”, which we invested in this time, felt that there was a good product that can realize high performance that exceeds the price. If you use cloud funding well, you can use high-quality goods and services at a low price. Please use it by all means. 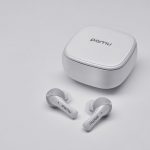